As part of the 25th edition of the MedFilm festival, the third edition of the MEDmeetings will be held, the event dedicated to the development of networking and productive relations between Italy and the industrial sectors of the southern Mediterranean countries.

The MEDMeetings that will take place on Friday 15th at the Macro Asilo Auditorium starting at 9.30, am, are promoted by MIBAC and LAZIO INNOVA – Lazio Region, main partner of the event. This edition will be dedicated to the Italian-Tunisian Development Fund, a historic act signed between the Ministries of Culture of the two countries and the result of the patient weaving of cultural relations operated by the MedFilm festival over the past 10 years, and the New Call “Lazio Cinema International”.  The MEDMeetings represent an opportunity to reflect on the commercial opportunities of Euro-Mediterranean production films and in general on international co-productions, but above all they are an opportunity to study the new calls for Europa Creativa, the new Cinema Law, the Call for the development of projects in co-production between Italy and Tunisia and on the “Lazio Cinema International” New Call. The meetings will be attended by representatives of Europa Creativa – Media, Mibact-General Directorate for Cinema and Audiovisual, Lazio Region, Lazio Innova, Rome Lazio Film Commission, CNA Cinema and Audiovisual and Doc.it.

The day’s program includes a first part of reports on co-production opportunities between Italy, European partners and countries on the southern shore of the Mediterranean, a reflection on cultural perspectives and funding in case of co-development and co-production with Euro-Mediterranean countries and the state of art on the winning projects of the first Italy-Tunisia Development Call.  A networking and pitching session will follow and, together with the Spanish producer Javier Lafuente, it will include the participation of Tunisian producers as Habib Attia, Chawky Knis and Mohhamed All Ben Hamra. 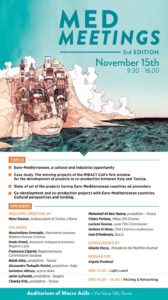