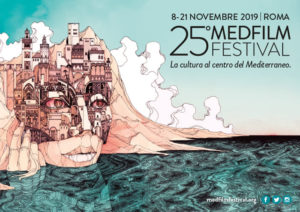 Unexpected encounters in the melancholy uncertainty of an Augustan Madrid. A long love letter from a mother to a daughter in the Aleppo torn apart by bombs. Expectations, hopes, wishes of three sisters in a small village in the heart of Anatolia. A group of people in a state of siege while the war between Israel and Hezbollah looms outside. The grudges and frustrations watered down in whiskey in a pitch-black Greece. The mental and emotional images of an impossible film between father and son, between today’s Denmark and yesterday’s Palestine. The obsessive stalking of two lost women in a labyrinthine Tunis. The visionary escapes to the borders of civilization, including giant snakes, monoliths and telepathic communications. Beyond and on this side of the Mediterranean, at the four corners of a geographical map without a centre. Cinema and history are made in the suburbs of the world.